Our group was a little small this week as one expectant Mama had her baby on Thursday and the other was actively in labor on Tuesday!  So we are very happy two healthy baby girls into our family!!!  The family is very excited to hear all sorts of new baby squawks and new Mama stories soon!

For dinner, Dad made what I think is one of his favorite meals, Chianti Braised Beef over White Rice.  He served this with Sauteed Cauliflower and Leeks and Buttermilk Honey Bread.  For dessert Mom threw together (although you wouldn’t know it) a Skillet Apple Cake.

So, little miss here got to ride Thunder Pony today.

How did that go?

Super cute, she wasn’t sure about him at first, but then loved it.  I think he is going to come live with us, once it dries up a bit.

Hi!  How did your lesson go?

Do you have clay?

I have to make a clay pot for my school diorama.

Oh OK, let me go find it. You can work on it after dinner.

Braised beef.  (insert adolescent nose crinkle) But I made just some plain beef for you.

But you have to try a piece if you think you’re going to spend the night.

You’re mean! You said I could spend the night already!

New rule, you have to try one bite of whatever everyone else is eating to spend the night.

You don’t want the braised beef?  Isn’t that piece dry?

It shouldn’t be dry it is just pan fried instead of braised.

She wont eat any meat with sauce or gravy on it.

I was so happy when her sister gobbled up stew the first time, I was like “AH! Here is my favorite child!” (Winking at big sister)

Is your husband coming?

He should be on his way.

Here, turn his plate and cup over!

Turn his fork and spoon over too!

Can you say prayers please?

Bless this house, Lord we pray, keep us safe by night and day.  Amen

And watch over our new Moms, and safe deliveries to the new baby.

We still haven’t heard the name yet?

They are holding out to the bitter end huh?  Guess we will have to wait!

Ok, do you want some meat too?

Your sister is eating meat.

Your cup is right there.

So Lee was a hero last night.

So we were at my parents store last night for my Aunt’s birthday, and as we were getting ready to leave this old fella pulls in right behind me and starts waving and flashing his lights.  And I was thinking what the heck? So, I got out of the truck and went over to his car, and he was having a heck of a time getting the windows open, and he finally got them.  He asks me, “Can you PLEASE, tell me how to get back to town.” I said  “Yes, it’s about five miles that way.” He starts tearing up and says “Oh good, I have been driving around for almost four hours, I’m just trying to find my way home.  I just want to go home.”  Well, I ran in real quick to see if my Dad was still there so I could just drive the guy home, but he had already left, so I asked the guy if he could just follow me out.  He was so relived, but I had to go that way anyway, and I asked him where he lived, which is just down the road from here a bit.  So he is following me, and we are going 35 miles an hour down the road (which is a road people usually travel at least 60 MPH on) and I get him to his road.  I wasn’t sure exactly which house was his, so I pulled over and put the 4-ways on and go talk to him.  He told me which house was his, and I asked him if he needed help getting the car put away.  He said no, and gave me $10 and said I was good to go.  Well, I decided to wait until he was in the house, because I had called Emily while I was driving out with him, and she said to make sure he got in the house, because we didn’t know if maybe he was remembering a house he used to live in or exactly what was happening.  Then he backs his car up, turns to go in the driveway and misses it completely, puts the car right in the ditch.  I go over, and he says “I am having a bad day.”  I asked him if he wanted me to call a tow truck and he said “No, I’ll do it at the house”, Well, he walks with a cane and there was no way I was going to be able to get him out of the car and into the house easily, so I called the tow truck for him, and they were about 30 minutes away, OK, no problem.  So then this truck pulls out, and a man jumps out and yells “Is that my Dad?!?”, I said “I don’t know is it?” And it was, then the police officer showed up and told me I had just found a missing person.  Apparently his son had called him in missing several hours before, because he was also diabetic.  I had some pizza in the car Mom gave me from the store, so I gave him some of that.  I was chatting with his son a little bit and gave the money back to him, I just wanted to see the poor guy get home.  The officer wanted him to get out of the car when the tow truck came, but we all decided since he wasn’t able to walk well, it would be better to just leave him in the car until it was out.  So everything, got all taken care of and I left.

He was one lucky guy to find you.

That’s amazing, poor guy he was having a bad day.

I felt so bad, I just wanted to see him get home.

Talk about a God thing, us just happening to be there last night, him just happening to catch Lee, who is about the worlds best direction person and happened to be going the same way, it was lucky that you couldn’t drive him because he might have gone in the house and had a diabetic crisis and his family wouldn’t have known he was home.  All very lucky.

I can always tell when I made a sweeter bread, you eat more of it.

Do I? (Looking at the last piece in the bread basket and snatching it up)

Hi!  I’ll cut you some more bread, I took your piece.

I strive to not be in the work clothes.

I’m not sure there is any left!

Oh, there is plenty.  Does any one want seconds?

I’ll leave some for her then.

There is another loaf if you need it.

How are you going to do that?

Start at one wall and go all the way across.

I’m glad they got the 90′ figured out at our house but the ceiling aren’t quite there.

Oh the ceilings here are all over the place too.

How are the worms?

They are good.  I threw out a bunch of the compost stuff and started over, it was a little too far gone.

Any baby worms yet?

Not yet, there is some fuzzy looking stuff and I am not sure if it is worm eggs or mold.  The mold can be normal obviously because its compost.  I guess I will just have to watch.

So when you get a bunch of baby worms do you start moving the bigger ones outside or how does that work?

The actually don’t recommend moving these worms outside because they aren’t very hearty and will freeze.  I guess they just kind of maintain a status quo, as more hatch the bigger ones die at a higher rate becoming compost too.

Huh, that’s interesting.  They just adapt to the food supply I guess.

Kind of.  It’s a little sad, oh look you had babies, now you are going to die, but its how it works I guess.

Look at that one though running off.

Well technically she is in the middle, not on the cleaning side.

At least she cleared hers…

This is really good!

I don’t know if I could repeat it.

Some ice cream would be perfect with it.

I was going to have you stop and get some, but figured you’d rather eat dinner.

Did you bring the leather?

No, I’ll run home and bring it back.

You can bring it next week.

I won’t remember next week either. Be right back.

Are you going to use the wood burner on it? 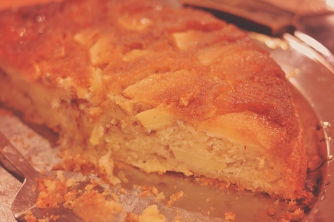 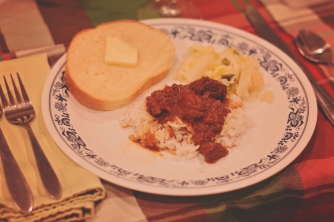