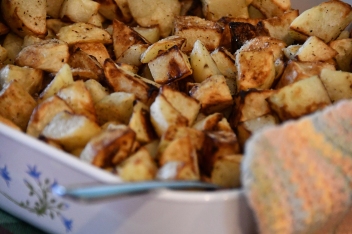 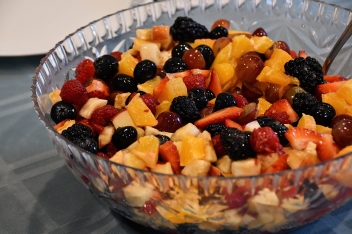 It doesn’t seem possible my oldest is 11 already!  She is pretty good at keeping us on our toes for her birthday, and this year she was all about the cheeseburger.  I don’t know if she was feeling nostalgic about her first birthday, as a 1-year-old she was in love with hambaburgers, but we had them at least twice this week in celebration of her birthday.

To accompany her cheeseburger buffet, we also had milkshakes (made to order vanilla, strawberry or chocolate), oven roasted potatoes and a new dessert, Lemon Chiffon cake.  The cake was light and fluffy with a rich lemon pudding in the middle.  This kiddo loves her lemons too!

Joining us in birthday celebration there were; 15 adults, one tween (the birthday girl), one 3- year -old, one 2-year-old and two 1-year-olds.

And as you might have noticed my photographer was back in action this Tuesday, we talked about her current magazine projects and up coming ones.

We talked about the young man who was on mission work, was headed home due to safety issues in the country he was in.

We talked about excessive underwear, and when it’s time for pajama pants to go…

We talked about painting turkey and goose feathers, and some cool examples of what my aunt has done. And we talked about how yet again I forgot her goose eggs, and syringe for cleaning them.

We talked about the new jobs in the family. And hockey seasons that ended and games that were coming up.

Did you know that they visited?

Oh, well, we won’t tell you they were here then, but your twin says hello!

My kids argued about who’s milkshake was whos, and no they didn’t need apple juice instead.

The littles all ran around and played together with balls and books and other goodies.

Name tags were found and soap was remembered.